Instamojo Closes Series B Funding Round at Rs 50 Crore!! 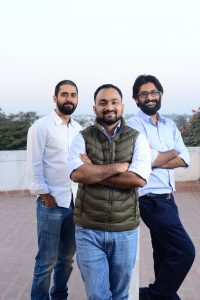 the closing of its Series-B round of funding. The round saw Instamojo raise Rs 50 Crore, led by both existing and new investors. Existing investors included AnyPay, Kalaari, Beenext & Rashmi Kwatra, along with first time investor – Gunosy Capital.

Instamojo began its journey in the Fintech space with its flagship product – The online payment link, thereby solving the digital payments challenge for several entrepreneurs. Focused on empowering the Indian MSME sector, the company recently expanded its portfolio by providing logistics and lending services to small businesses. This provided businesses smarter and simpler solutions to enhance their services and sustain in a digitally evolving landscape. With this new round of funding, Instamojo aims to transform itself into a full-stack Fintech service provider, enabling the MSMEs of the country to build, grow and sustain in a competitive environment.

Sharing his thoughts on the new round of investments, Sampad Swain, CEO & Co-founder, Instamojo said, “The Series-B funding comes as a boost to our business and we are grateful to our investors for believing in Instamojo’s vision. We are extremely positive and excited about the opportunities that lie ahead for us as an organization and how our efforts can help revolutionize the Indian MSME sector. With the introduction of our recent lending and logistics services, Instamojo is today on its way to becoming the 360º digital-enabling partner for MSMEs for all shapes & sizes.”

Founded in 2012 by Sampad Swain, Akash Gehani and Aditya Sengupta, Instamojo received their first round of investments in 2014, followed by a Pre Series B funding led by Japanese based firm AnyPay in August last year. Speaking on being part of Instamojo’s Series B Funding round, Taka Inoue, CEO of AnyPay said, “Our association with Instamojo started in August 2017 and since then we have only seen extraordinary growth at their end, in terms of sales and MSMEs on-boarded on the platform. Now Instamojo is all set to evolve from just being a payments company to full stack service provider who supports logistics and short terms loans to empower Indian MSMEs and we are confident that Instamojo will be soon become indispensable for all entrepreneurs in India. AnyPay joined this round as a continuation from the previous round and I, myself will be joining Instamojo team as a board member.”

The Series B round also saw the participation of first time investor Gunosy Capital. “We believe that digital and cashless economy has grown rapidly in India, and its e-commerce market is also expanding. From that background, Instamojo has been doing great business in the market and is expected to continue expanding. “, said Yuki Maniwa, Director of Gunosy Capital.

Instamojo today works with and enables over 600,000 MSMEs to build, manage and grow their business. As part of their upcoming plans for 2019, the company aims to introduce promotional services, helping the MSME sector stay relevant in a competitive digital business landscape.

Instamojo is a growth gateway platform for Micro, Medium & Small Enterprises (MSME’s) that enables them to build, manage and grow their business online. It is a one-stop shop for an entrepreneur that caters to their diverse business needs by leveraging technology,​ data​​ and ​​design. Founded in 2012 by Sampad Swain, Akash Gehani and Aditya Sengupta, Instamojo initially raised Pre-Series B funding from AnyPay-a Japanese payments firm. ​In November 2014, the company raised USD 2.6 million in Series A funding from Kalaari Capital, Blume Ventures, 500Startups and others. Prior to this, it had raised approximately USD 500,000 from 500 Startups, Blume Ventures and angel investors Rajan Anandan, Sunil Kalra,​​ Shailesh Rao, ​​Rob ​​de ​​Heus​​ among​​ others. In 2012, Instamojo was one of the first startups from India to join the prestigious 500Startups Silicon Valley Accelerator​​ Program. ​​It ​​has ​​also ​​been​​ featured​ ​as ​​one ​​of ​​the ​​hottest ​​start-ups ​​by ​​Economic ​​Times​​ in ​​2015. Instamojo constantly works towards creating significant innovation in digital commerce, which is universally accessible to create newer opportunities & sustainable livelihoods for MSMEs.